When it comes to designing your dining there is a lot to think about. You need to use furnishings that are suitable for the size, and colours and fittings that are to your taste. The bonus is that with more suppliers and manufacturers in the market than ever before you are certain to find items that are of a high quality at sensible prices.

However, its the decision on the style of the dining room that you need to work hard on. This is a room that you are going to use a lot and need to feel comfortable in. It’s one that all the family will be using and should appreciate. So, what style should you choose? Do you opt for an ultra-modern design that is right up to the minute, or are you someone who appreciates nostalgia?

What is Mid-Century Design?

Furniture design, along with fashion, architecture, automobile and product design, is an ever-evolving area of art. However, it’s acknowledged that perhaps the biggest and most important revolution in furniture design came in the middle of the 20th century.

The world had been pushed forward in design terms by the art nouveau and art deco movements, and this was brought up to date with the arrival of what we now term ‘Mid-century Modern’. That’s what we’re primarily looking at here. So what is Mid-century Modern design, and why is it in style now?

Mid-century Modern came about in the post-war years when the world economy was in turmoil yet swift advances in technology and manufacturing methods had been seen during the concerted war effort. This design ethos was inspired by the Bauhaus movement which led the way in pre-war Germany, and the effect was a new style of design that was simple, modern and cheap to make. Here are the main characteristics associated with Mid-century Design furniture:

So what we are looking at is an era in which plastic and metal furniture made its mark in the form of chairs and sofas, beds and tables, and in which unusual woods were tried for the first time.

Adornments are few, and the designs are entirely functional rather than having been created for appearance only. These criteria should be on your list when you are looking for your mid-century dining room furnishings.

Be aware that you don’t have to pay for expensive vintage examples, as there are many manufacturers catering for the mid-century fan with modern furniture inspired by or replicating this phase of design. Have a look at these tables for example of quality modern furniture that exhibits the characteristics of the era.

Decide on the Décor

The way to get an idea for your mid-century dining room is to look through style magazines and also auction catalogues, which should get you inspired. Take into account the different areas of mid-20th century design that came with the era – from chairs to wall hangings, through small fittings and fixtures to lighting for example – and make a list of those that you like, and the designers associated. You’ll find the following designers crop up often in mid-century modern: 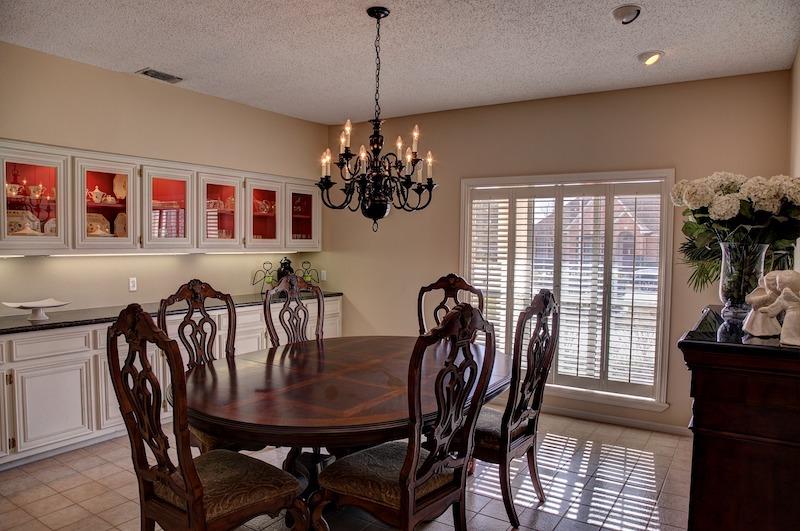 The above and others are worth researching for ideas, and many of their products are replicated today by plenty of manufacturers. We suggest taking a lot of time thinking about what you want in your mid-century modern dining room if you are to get it right.

Understanding the Style and Choosing Your Furniture and Fixtures

If you are going to go down the mid-century modern route – and it’s a great look that will give a fresh approach to even the smallest of dining rooms – understanding what inspired and who was subsequently inspired by it is always important. That’s why we recommend you get to know the people involved more readily and understand why this movement inspired a change of design in the USA.

In many ways this take on the vintage look is one that is more practical than that we would traditionally consider vintage. Looking at some of the furniture designs from the era it’s difficult to believe they are more than 70 years of age.

Such was the impact of mid-century modern on not just furniture design but on fashion, jewelry and even on automobile design that it is one of the few movements that has left a lasting mark on our homes.

Clean, modern and stylish, this is a dining room look that will be inspired by the dawn of the jet age, a time when designers were unafraid to work with then radical material and take things to the extreme in terms of simplicity.

Take your time to become familiar with mid-century modern and the people who drove it forward, and you’ll be inspired to create a dining room that is the envy of your friends.